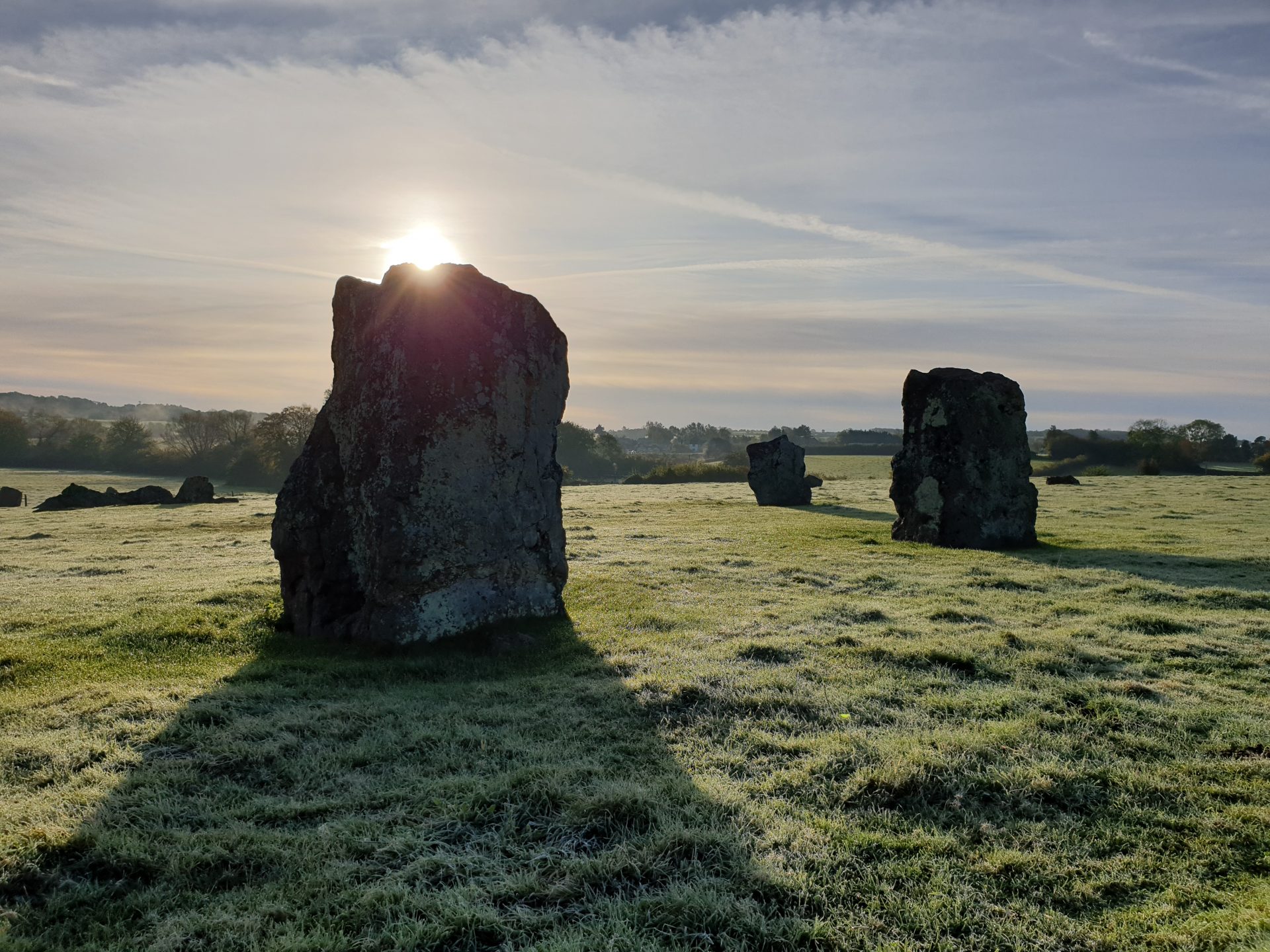 I visited the Neolithic/Bronze age stone circle complex at Stanton Drew in the Chew Valley near Bristol, arriving an hour before dawn with the new moon rising into the still starry sky. I walked out across a field towards the huge 113 metre diameter stone circle. My wellies crunched through the luminous white, ice-frosted grass – the first deep frost of the year. The mist was rising in smoky swirls that twisted and twined around the standing stones. I felt like I could almost see the dark figures of ancient peoples walking between the stones preparing for a great ceremonial gathering.

I arrived at Stanton Drew just before the date of the old festival known to the later Celtic cultures as ‘Samhain’ (pronounced Sow-win) which celebrates the end of the harvest season and beginning of the winter season. This festival is traditionally celebrated on 31st October-1st November or at the nearest new or full moon. It is known as one of the four ‘cross quarter’ festivals which comes half-way between the Autumn equinox and the Winter Solstice. In modern times it has become known as Halloween. This is said to be a time when the veil between the living and the dead grows thin and the ancestors are invited to join the communal feasting and celebrations. It is a very ancient festival celebrated in many cultures around the world and it is likely that our Neolithic and Bronze-age farming ancestors would have also celebrated it in some form.

As I entered into the large main circle, I imagined the enormous wooden posts rising high above me, arranged in nine concentric rings inside the stone circle. Recent archaeological surveys have discovered the impressions of these metre-wide posts that would have been fashioned from large trees cut from the surrounding forest which then stretched relatively unbroken across the country. Along with a huge seven metre-wide ditch dug around the main circle, the Stanton Drew ceremonial complex would have been an awe inspiring sight to all those who visited it in its prime. It’s believed that the wooden henge pre-dated the stone circles by at least a thousand years. This was therefore already an ancient ancestral site when it was memorialised in stone by our Bronze age ancestors, thereby enabling its memory to endure into the modern day, where we can still see and imagine some of its former glory.

Walking around the circle as the sun rose over the nearby wooded hills, I could easily feel the separation of the years falling away, and those ancient peoples felt uncannily close by. I made my way down to another stone circle to the Northeast of the main circle. Although smaller in diameter, this circle has seven very large stones still standing, with one fallen, making an almost complete stone circle. The stones cast their long shadows across the thawing grass and I could make out imaginary human faces and animals in their weather worn, cragged, and lichen covered surfaces. There are further large standing stones outside the circle forming an avenue which originally led down to the River Chew, where old Ash and Willow trees now grace the banks. I did my daily nature ritual at the centre of the Northeast circle, facing each of the cardinal directions in turn, which were roughly aligned with the eight great stones in the circle. I honoured the trees, animals and plants in my ‘nature ritual wheel’. Doing a nature ritual in such a place gave me a powerful sense of connection with the countless generations of peoples who performed their own rituals here over so many thousands of years. There is an old belief that ancestral spirits can live on in birds, so the many crows cawing and wheeling darkly in the sky above me and landing on nearby stones gave a me a tingling sensation of being surrounded by ancient eyes looking on.

I then climbed the gentle slope back up through the main circle towards the top corner of the field, through a gate, and up to a third stone circle to the southwest of the main circle. Although, most of these stones have been worn down by time, this circle had a very uplifting and lightening atmosphere with largely uninterrupted views of the surrounding hills. I could see down towards the main circle and imagine an ancient procession honouring the dead ancestors of the community, working its way up from the river, drums pounding, to the Northeast circle, then proceeding into the main circle with its enormous wooden totems. There it met another procession of the ‘living’ journeying down from the southwest circle. The truth is that no one knows what rituals were performed here over thousands of years but it’s enjoyable to imagine and speculate how it might have been all those generations ago.

Finally, I went to the nearby village pub garden of the aptly named ‘Druid’s Arms’ where there are three more large stones forming ‘The Cove’ which are believed to date from nearly a thousand years before the stone circles. Archaeological surveys indicate that this was the entrance of an ancient chambered tomb, which itself may have memorialised a previous ancestral communal long-house building on the same site. One could see how the very earliest post-glacial settlers in the primeval forests covering the land, may have begun to clear areas for the earliest farming and connected deeply with this landscape. Successive generations could have then memorialised, honoured, and even worshipped their pioneering ancestors by building enormous wooden, and later, stone monuments. Spending time in this ancient landscape can bring a feeling of being closer to these ancient peoples, and to do so at the new moon on the approach of the old festival of Samhain was particularly special. 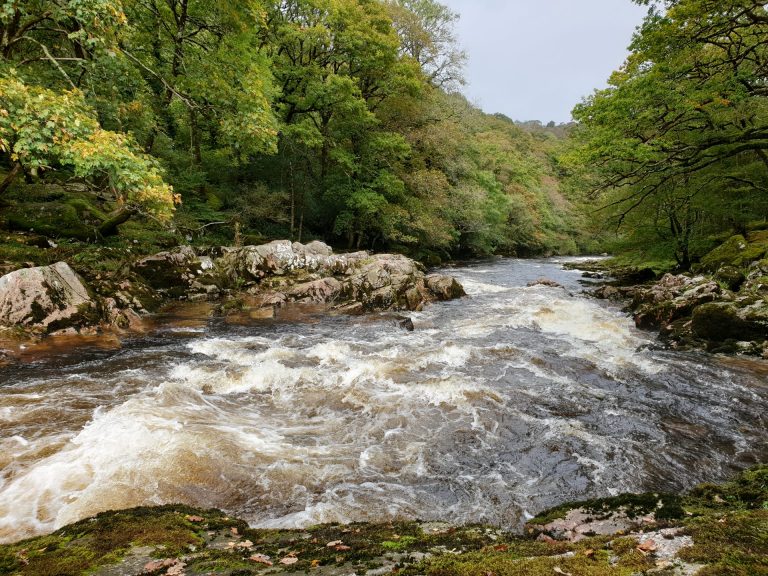 I arrived on the tors high above the River Dart in the Holne Valley on Dartmoor, just as the pale sun rose shedding a golden light through the misty Autumnal valley. I sat on a large granite boulder and did my daily nature ritual where I honoured the four directions in a clockwise circular motion…

We use cookies on our website to give you the most relevant experience by remembering your preferences and repeat visits. By clicking “Accept All”, you consent to the use of ALL the cookies. However, you may visit "Cookie Settings" to provide a controlled consent.
Cookie SettingsAccept All
Manage consent

This website uses cookies to improve your experience while you navigate through the website. Out of these, the cookies that are categorized as necessary are stored on your browser as they are essential for the working of basic functionalities of the website. We also use third-party cookies that help us analyze and understand how you use this website. These cookies will be stored in your browser only with your consent. You also have the option to opt-out of these cookies. But opting out of some of these cookies may affect your browsing experience.
Necessary Always Enabled
Necessary cookies are absolutely essential for the website to function properly. These cookies ensure basic functionalities and security features of the website, anonymously.
Functional
Functional cookies help to perform certain functionalities like sharing the content of the website on social media platforms, collect feedbacks, and other third-party features.
Performance
Performance cookies are used to understand and analyze the key performance indexes of the website which helps in delivering a better user experience for the visitors.
Analytics
Analytical cookies are used to understand how visitors interact with the website. These cookies help provide information on metrics the number of visitors, bounce rate, traffic source, etc.
Advertisement
Advertisement cookies are used to provide visitors with relevant ads and marketing campaigns. These cookies track visitors across websites and collect information to provide customized ads.
Others
Other uncategorized cookies are those that are being analyzed and have not been classified into a category as yet.
SAVE & ACCEPT